Adam Gaffen for Amazing Stories Magazine:
Our first Interview is with K.D. Emerson, author of – well, let’s just get right into this, shall we? What is the title of your book?

K. D. Emerson: Oooh lala! I love this question because the title of my book has a double meaning. Title: Digitus 233

ASM: A double meaning? Any hints?

ASM: Where did the idea for the book come from?

KDE: The dark corners of my mind. I love allowing my imagination to take what is and expand it to what may be…

ASM: What genre does your book fall under?

KDE: Dystopian Science Fiction set in the near future. It can also fall under action/adventure/fringe science/mature young adult/thriller. There, I think that about covers it.

ASM: Can you give us a one sentence synopsis of your novel?

KDE: When Zander was ushered onto the luxurious Lear Jet the end of the world was the last thing on his mind

ASM: Will your book be self-published or represented by an agency?

KDE: My book was published with Master Koda Select Publishing (MKSP) due on Dec 21, 2012 – just in time for the end of the world. It will also be available on Amazon.

ASM: How long did it take you to write the first draft of your manuscript?

KDE: The very rough edges of the rough draft simmered for several years on the back burner of my mind. The actual writing took place over several months.

ASM: What other works would you compare your story to? 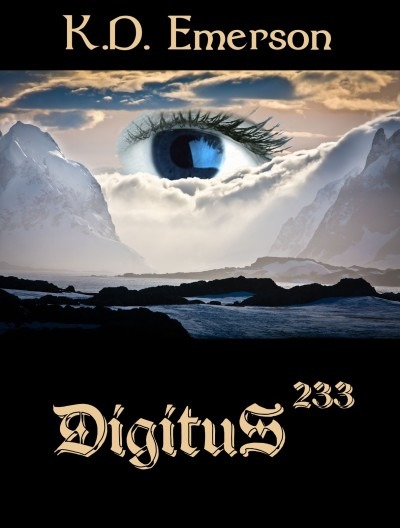 KDE: It’s kind of a combo meal between The Hunger Games, Clive Cussler novels, the classic Nineteen Eighty-Four by George Orwell and the movie The Manchurian Candidate set to the tune of Hotel California.

ASM: Who or What inspired you to write this book?

KDE: The events in Nazi Germany during World War II, the reality that freedom (and life) can so easily slip through our fingers, the intrigue of fringe science and how it can be used for good or evil (depending on who is in control).

KDE: After much argument from the main characters of the book it was finally decided to give a fleeting glance inside the upcoming novel Digitus 233 from author K.D. Emerson.

Deep within the dark abyss of his own mind, Zander tried to shout, but no sound escaped. It felt as though a heavy mallet beat against his skull. Pushing the pain to the back of his mind, he forced himself to focus and slithered through the murk toward a pinpoint of light. Gulping for air, he burst through the blackness and forced his eyes open.

A scream escaped before he could stop himself. Inches away, a face; a set of open blue eyes stared at him. Was it a dead body? He struggled with his arms and legs, but couldn’t force them to move. The eyes in front of him blinked. This time he caught the scream half way up and swallowed it. He had to get control of himself.

He fought against the pounding in his head. Where was he? What was going on? His eyes darted from side to side. The ceiling was ice, the floor was ice. And in front of him lay a blue eyed body gagged and bound up in some kind of slippery fabric-cocoon…

ASM: That sounds great!  So, where else can our readers go to find out about you and your upcoming books?