We’re presenting these images based on the publishing history of Amazing Stories; the magazine’s ‘year’ runs from April through March.

Last week we featured covers from Volume 2, April 1927 thru March 1928.  Today we continue with the third volume.

The winners of the previous poll have been announced in another post.  At the end of the four polls we’ll be conducting (next is April 1929 thru June 1929, plus the 1927 Amazing Stories Annual and the Amazing Stories Quarterlies for 1928 and two issues in 1929).  We’ll have a run off to pick everyone’s absolute favorite Frank R. Paul cover following the conclusion of the fourth poll.

Paul was the very first Guest of Honor at the very first World Science Fiction Convention in 1939. Fittingly so as he was handed an overwhelming task back in 1926: how to illustrate a ‘new kind of magazine’.

When it comes to the pulp era of science fiction, there is certainly no better illustrator. Other artists are different, as important, as creative, as awe-inspiring, but none are better.

Sometime later on this year, posters and other wall art featuring Frank R. Paul’s cover art for Amazing Stories is going to be available to the general public (which also happens to include fans).

First, you’ll see a mosaic of all of the covers in question, suitably sized to make a judgment. (If these still aren’t large enough for you, pop on over to our Paul Gallery and take a look there.)  Then, the poll.  Just click on the little dot to indicate your favorite.

We’ll announce the winning cover(s) at the conclusion of this poll. 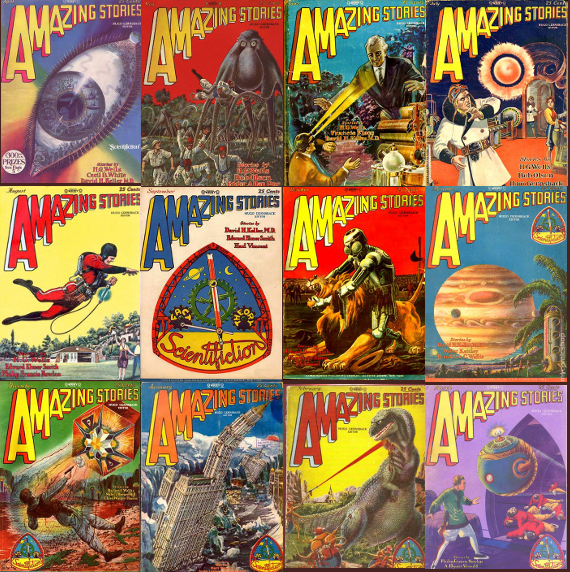 I expect this poll to be quite contentious as there are a number of absolutely iconic images included this time around.  It’s going to be hard to pick, I know – I’ve got at least three I can’t decide between!

We Have a New Administration