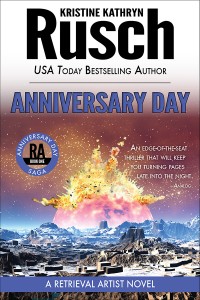 In addition to science fiction, I’m a big fan of the classic PI. Some years ago, Kristine Kathryn Rusch combined the two genres in “The Retrieval Artist.” The scenario is fairly simple. Humanity has moved out into the stars and met a number of other races. By treaty, if someone breaks a law, intentionally or otherwise, while in an alien race’s jurisdiction, they are subject to the penalties imposed by that race’s laws. The result has been an industry that helps people disappear.

Of course one industry often creates a competing industry, and this situation is no exception. Retrieval artists are a type of private investigator who find people who have Disappeared. Miles Flint is a retrieval artist based one the Moon, and he’s one of the best. Over the years, other characters have been added to the universe. The Anniversary Day Saga is a multibook series within the larger series. The first two books have already been published (Anniversary Day and Blowback). A Murder of Clones, the third volume, became available last week. The remaining books will be published at the rate of one a month until the series is complete. I’ll be reviewing the odd numbered books here, and the even numbered books on my science fiction blog.

Miles Flint isn’t the central character of Anniversary Day, although he does play a significant role. Rather the central figure is a police detective named Bartholomew Nyquist. He’s something of a loner who tends to have a high turnover in partners. When the novel opens, he’s meeting his new partner for the first time at a murder scene. During the investigation, both he and his partner are injured when someone tries to destroy Armstrong Dome.  He’s barely injured, while his partner barely survives.

Cut to a few years in the future. The anniversary of the attack is now called Anniversary Day, and it’s a big deal on the Moon. The case was never solved, but the population on the Moon marks the event each year. This year things are going to go to a new level.

The mayor of Armstrong Dome is planning on becoming mayor for life when he’s assassinated in a very public and horrifying way while leaving a speaking engagement. It’s not long before attacks on other public figures take place. Nyquist, Flint, and their colleagues find themselves facing a conspiracy beyond their worst nightmares.  The attacks are coordinated, carefully planned, and only the beginning.

This novel reminded my why I love science fiction and detective fiction. It’s a taught, high octane thriller that ratchets up the tension every few chapters. There’s a substantial cast of characters, and Rusch does an excellent job of balancing the competing points of view. Not all viewpoint characters get equal time on stage, but the ones who get the most time are fleshed out well.

The thing about Anniversary Day that had me reading was the suspense. I started the book the day of the Charlie Hebdo attack and finished it two days later. The book really resonated with me partly because of what I was seeing on the news. I stayed up past my bedtime three nights in a row to finish it. 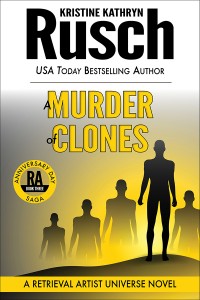 We don’t get answers to many questions, just enough to make us want more. There is, however, both a sense of closure for this part of the story arc and a strong desire to get to the next segment. If Rusch can keep the quality of the books as high as this one, the Anniversary Day Saga could become a milestone in the field.

If you like a blend of science fiction, detective story, and thriller, then you will want to check this one out.

Like I said, I’ll be reviewing the odd numbered books here as they become available, with the next being A Murder of Clones. Since I post every other week, that means for the next few months every other post here will be an Anniversary Day Saga review. I’ll review something completely different (fantasy or an anthology) on the other weeks.