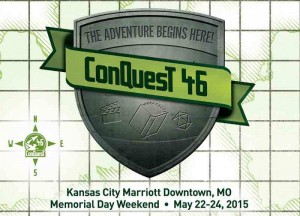 Every year the Memorial Day weekend marks the unofficial start of summer. For the last five decades, the weekend has also hosted one of the most amazing science fiction conventions in the world.

This year ConQuesT 46 in Kansas City, Missouri provided a truly epic adventure. Fans of science fiction, horror, and fantasy gathered downtown amidst buildings of concrete and glass to celebrate everything fantastic.

Vistas of alien worlds and mythic realms danced through the minds of those in attendance as torrential rains pounded the streets outside the downtown Marriott. Some suggested that the tempest raging outside had in fact been created when the legendary world-shapers in attendance had accidentally crossed energy streams.

Whatever the truth, ConQuesT 46 was an event for the ages.

The names in attendance were the keepers of secrets and the architects of dreams. Brandon Sanderson, Selina Rosen, Nene Thomas, Bradley Denton, and George R. R. Martin were only a few of the industry giants in Kansas City.

Many lucky fans even managed to try their hand at ruling the seven kingdoms with their turn on the Iron Throne.

This year the organizers of ConQuesT 46 decided to level up. For the first time, the convention was held in conjunction with Spectrum Fantastic Art Live 4 (SFAL). SFAL collects together the living legends of the fantasy and science fiction art community.

Some of you might be wishing you had remembered to schedule in this destination convention. Regrettably, this one is in the books.

The Kansas City Science Fiction and Fantasy Society has been honing their convention skills for five decades now, but they are constantly exploring new paths towards the elusive state of perfection. If you’re searching for a destination convention, start planning your trip for ConQuesT 47.

Next year downtown Kansas City will be the epicenter of another legendary event when the 74th World Science Fiction Convention takes place on the same grounds as this year’s ConQuesT and SFAL. The experience promises to be truly epic.