Home Anime/Comics Anime roundup 5/4/2017: May the Farce Be With You 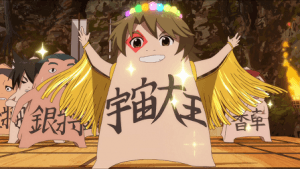 The Eccentric Family 2 #4 – Ah, the classic love story: boy meets girl; boy and girl fall in love, but they are kept apart by the pressures of society; boy and girl are reunited; girl gets sucked into interdimensional portal. But it was nice to see Yaichirō being something other than the uptight traditionalist for a few minutes. And also quite gratifying that Gyokuran is the sort of girl who can stand up for herself, whether it’s in a game of shogi or taking the direct approach with Kinkaku and Ginkaku. Between her, Kaisei (see last series), and Tōsen, the women of this world are really the ones to watch out for.

And let us not forget Benten. Stomping on the Nidaime’s shirts is the most petty thing, but it’s a declaration of an official feud between two of the most powerful people in town. They’re like two stormclouds building in the background, getting ready to unleash terror and misery on everyone around.

There were just so many wonderful moments in this episode. Tanuki shogi is the best. But so is the bit about Yasaburō filling in as a zoo exhibit so the regular one can go on vacation. And Tōsen sweetly but firmly ordering Yasaburō to get Yaichirō and Gyokuran together. No, never mind, tanuki shogi is just the best. And yes, incidentally, the drunken elephant was a real piece once. 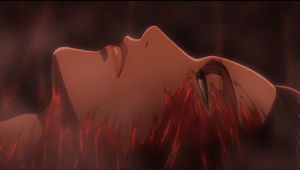 Attack on Titan #30 – Eren scores his first kill in human form, and it’s just a brief aside from the main story. Even though he is technically the protagonist, the show is finding it has much more interesting people to talk about lately.

This week it’s Ymir, who is yet another disguised Titan (what the heck, maybe everyone’s a Titan) and an outcast from society. Though trying to live only for herself, she found herself drawn to the rumor of an illegitimate child banished to the military. And she wound up seeking out that girl to protect her and urge her not to give up. Since this is a shōnen story, the talk is less about self-care and building her support network than it is about taking bloody revenge on those responsible, but hey, whatever works.

It also turns out that Ymir once killed Reiner’s buddy. I think we have a lot to learn about the exact circumstances around that. I also wonder just whose child Christa/Historia was, that the priests think she has some special knowledge about the Titans. But for now, it looks like everyone gets a chance to breathe and work out the unpleasant implications of what happened to Conny’s village. 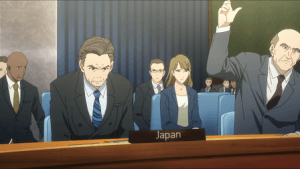 Kado: The Right Answer #4 – Not much information this week on where the wam energy is coming from, aside from the disturbing comment that what we see is simply a couple pieces of some otherwise uninspectable machine. But the scriptwriter has not forgotten to consider the laws of thermodynamics. Pump a bunch of new energy into the system of the Earth, with no change in how quickly it radiates into space, and you will indeed need to worry about global warming even if greenhouse emissions drop to zero.

All of which argues for taking things slowly, but of course every nation wants to get their hands on the new toys, so the United Nations moves to take charge of them. Making the UN the bad guys is a bit unusual for anime, which usually really likes the whole global cooperation thing. On the other hand, the real villains behind the UN resolution are unspecified major powers (yes, yes, I think we all know who we are), which is more in keeping with anime tropes.

So zaShunina needs to come up with a clever plan to get the wam distributed before the UN can move in. Apparently it requires the use of an eccentric genius scientist. This should be interesting. 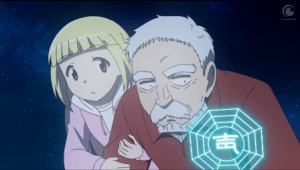 Alice & Zoroku #5 – Agent Ichijō is here to kick butt… erm… arms. Anyway, she displays power with a range that nearly rivals Sana’s, but with much more fighting practice behind it. She’s far and away the most dangerous individual we’ve met yet, so good thing she’s on Sana’s side.

Ichijō’s origin story goes absolutely nowhere toward explaining what the Dreams of Alice are. So far we’ve got Minnie C using the spirit of her dead husband, Sana forming spontaneously from some alien power, and now Ichijō cloning the power of her favorite magical girl by falling asleep in front of the TV. Also, how is it that Ichijō’s gate manifests in a different color, and yet otherwise looks just like Sana’s? I think there may be more to the story than she’s letting on for now.

With most of the lab personnel and test subjects rounded up now, we might get that domestic comedy we were originally promised for a while. With Sana’s powers and her baggage, though, I don’t think that means things are going to be dull. 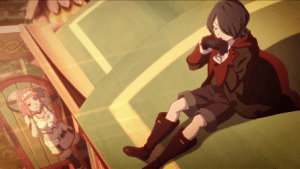 Rage of Bahamut Virgin Soul #4 – The first faceoff between Nina and the Onyx Guard is inconclusive, but it does show that in dragon form, she’s more powerful even than a major demon. Even after that, she’s trying to pretend that none of it is really her problem. As long as Mugaro stays with her and Bacchus, though, they’re going to be at the top of Charioce’s hit list – and remember that he’s already taken out a few gods.

If that doesn’t stir things up enough, Azazel is off trying to gather more demons for a proper war against Charioce. Charioce also has Mugaro’s mother imprisoned, and she turns out to be Joan of Arc, another character returning from the first series.

It feels like all the pieces are finally set up now. What’s the first move? I’m going to guess Charioce trying something new to flush Mugaro out of hiding.