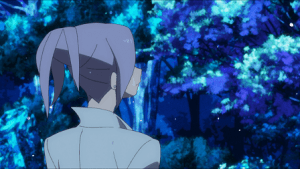 The Eccentric Family 2 #10 – The tengu decide not to have a huge fight which could kill everyone in the crossfire after all, and for a while life is good. Yaichirō is about to be become the leader of the local tanuki by acclaim. Yajirō is having a nice time touring the rest of Japan. Yasaburō has found a comfortable bolt-hole to spend the new year in, on the premise that if the Friday Club can’t find him then they won’t eat any tanuki, which I don’t quite follow but it seems to be working. People are vaguely aware that Jurōjin and Temmaya are probably scheming up a plan to deal with him, but no one gives it much thought.

Until the news arrives, far too late, that Kureichirō is not acting like himself. In fact, he’s acting like he’s been replaced by a completely different person. In fact, I’m going to go ahead and guess that the real Kureichirō is the lazy slob Yajirō just met in Shikoku, and the pillar of the community everyone has come to know and love in Kyoto has been Temmaya all this time.

Before anyone has a chance to say “oh crap”, Kaisei and Yasaburō have been taken down with tranquilizer darts and are on their way to be the main course at the Friday Club’s annual tanuki dinner. And since Kaisei’s note claims they’ve eloped, the only person in Kyoto who’s going to know otherwise is Professor Yodogawa. Not exactly the most effective help they could have. 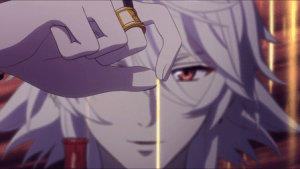 Kado: The Right Answer #9 – It’s all business as usual for Kado for most of this episode. While Shindō gets another lecture about the physics of higher-dimensional space, his coworkers remind us how awesome he is supposed to be. Both men and women look at him as potential boyfriend material but ultimately deem themselves unworthy. (It is also very in tune with the pragmatic slant of the story that Hanamori doesn’t mope over unrequited love, but rather decides it’s his job to find Shindō a suitable girlfriend.) Even zaShunina wants him to come along to anisotropic space as his best buddy while the universe is destroyed.

It turns out our multiverse was created by zaShunina’s people, because being able to absorb information in 37 dimensions at once leads to serious boredom. So they set up tons of universes with varying physics and trusted in the weak anthropic principle to eventually deliver an intelligent species capable of generating sufficient information density to keep them entertained.

zaShunina’s analogy for this is raising silkworms. The part left unspoken is that extracting silk threads involves boiling their cocoons…killing the silkworms. Suddenly zaShunina is the biggest threat humanity has ever faced, and Shindō needs help from someone seriously powerful. Like, say, having the sysadmin of our entire universe barge in and tell zaShunina to quit abusing his cheat codes.

It’s been clear for a while that Kado is playing around with a metaphor for Japan’s past experience with being confronted by more-advanced civilizations who want it to open up to the wider world. The Japanese term for “anisotropic”, ihō, was probably selected less because this story required zaShunina’s higher-dimensional space to have that property, and more because it has a homophone meaning “foreign country”. But it really kicks up the comparisons a notch with a reference the foreign technology causing a worldwide economic bubble — which is a very specific reference to the Japanese economy of the 1980s. The part about the aliens wanting to squeeze entertainment value out of our universe is left as an exercise for the foreign viewer. 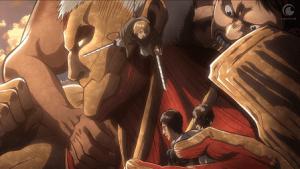 Attack on Titan #36 – After a long hard chase (how have those horses not collapsed from exhaustion yet?), the Scouts have caught up to Reiner and are ready to save the day! And leading the charge is Mikasa, though she does have time to explain to Christa that if there is one thing she knows, it’s that you can’t be the #1 badass warrior lady if you waste spoons trying to figure out other people’s girlfriends.

And that points up a big reason why I think this season tops the first run of Attack on Titan. Mikasa and Eren and Armin are such one-note characters that keeping them away from the action has only worked to its advantage. Not that this wasn’t an interesting story when it was focused on them, but the characters getting most of the screen time this season are making it a far richer experience. I hope that when the focus shifts back to Eren, the story can make a better argument for making him the protagonist again than being a Chosen One. 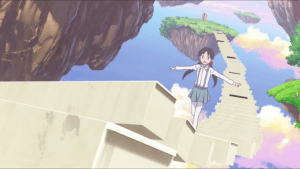 Alice & Zoroku #10 – After realizing she’s trapped the wrong person, Sana’s next step in her grand evil plan is to collect the right person and subject her to some mind-bending Wonderland shenanigans. This impresses people rather less than she expected. Zōroku has gotten used enough to Sana’s power that an outbreak of interdimensional portals and an anthropomorphic rabbit avatar barely get a world-weary sigh from him. And Hatori is hardly going to be impressed by Sana’s amateur idea of being threatening.

Hatori lets Sana make a fool of herself for a bit, then invokes her own power. At which point, it turns out that taking an alien consciousness which is maintaining an entire pocket dimension and then subjecting it to mental coercion is a pretty bad idea. Wonderland starts growing uncontrollably, new powers start popping up everywhere, and reality as a whole starts going a bit pear-shaped.

This implies that Sana, or her previous form, is somehow the source of all of the Dreams of Alice. She contains all the possible powers, or used to, and any abilities that appear in the general population are loose threads of a sort. 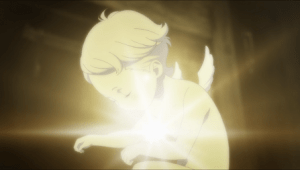 Rage of Bahamut: Virgin Soul #10 – Our heroes are ready to escape, while the hosts of Heaven are on the verge of invoking some monumental power, and so it’s time for…an episode-long flashback.

Here we see how Joan of Arc quit the Orleans Knights because she didn’t want any part of a war on Heaven, ran away to 15th century Shropshire, and experienced a sudden divine conception/pregnancy/birth that produced a son whose age appears to be backdated to the time of the previous series. (Note for anime writers trying to copy bits of Christian mythology: the Virgin Mary got a full briefing ahead of time, and a chance for informed consent in at least one version of the story.)

At least we can be fairly sure that Mugaro is male now, and have the full explanation for his changed appearance. One further question this does raise, though, is what did Charioce want from the angels before he started attacking them or knew about Mugaro?