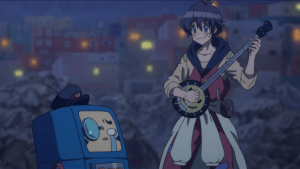 The Irresponsible Galaxy Tylor premiere – Long after the age of Irresponsible Captain Tylor, the human race lives in one Big Dumb Object built around a star. Collecting garbage around its outer rim are another Tylor and his nervous robot friend. One day, they come across a mysterious object and meet a girl who has just woken up from hibernation looking for a Tylor…

…and that’s all, because it’s only a three-and-a-half-minute episode. In installments that small, it’s going to struggle to put together much of a story by the end of the season. It’s not even much of a stroll down memory lane for fans of The Irresponsible Captain Tylor, being all new characters. 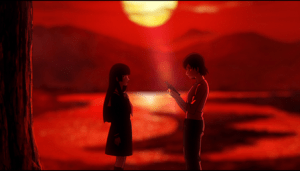 Hell Girl: Fourth Twilight premiere – If you go to a certain URL at exactly midnight and enter the name of a person you hate, the Hell Girl will take that person away for eternal torment. Or that’s the theory, but Shizuka Mayama discovers that it’s a little more complicated. The Hell Girl, Ai Enma, appears before her, but refuses to perform the service because Shizuka isn’t certain enough. Also, Shizuka wants an entire pack of bullies taken away, but she has to choose one person.

Shizuka has to return to face the taunts and find some other way to cope, while Ai and her servants watch. Eventually events take a turn such that Shizuka can pick one person to go to Hell, even though the price is that she will be eternally damned as well.

This is horror through and through. Once you accept that this is one of those stories where bad things happen to good and bad people alike, the logic of the plot becomes easy to predict. If every episode is going to be like this, it’s going to get tedious and depressing. On the other hand, there’s the beginning of a larger story with a girl who appears to Ai twice, trying to talk her out of the occupation she’s chosen.

The art is good overall and very pretty in places. The show has a clear affection for Ai and her crew, which I hope means she won’t be presented as the agent of unjust punishment the whole time. 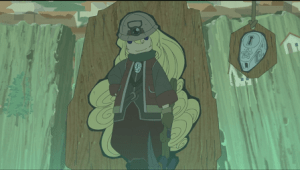 Made in Abyss #2 – Efforts to figure Reg out go nowhere, so Riko and company decide to bring him into the orphanage undercover as just another kid. Leader seems like a smart guy, so either he’s faking being fooled, or this is a world where amnesiacs with mysterious mechanical prosthetics aren’t especially out of the ordinary.

Further evidence of the screwed-up-ness of Orth are the revelations about the effects of the Abyss on explorers. Past a certain depth, returning means possibly transforming into something inhuman. (Robots, perhaps? Or those creepy monsters that come floating up from the depths?) And Riko has been affected by being born in the Abyss (or maybe by that artifact that supposedly protected her) so that something about her just can’t handle the sight of the everyday world properly. And Riko’s mother was a noted killer, and may still be alive in some form at the bottom of the Abyss.

We are deep in H.P. Lovecraft territory here — metaphorically for now, but since the next episode is titled “Departure” I presume Riko and Reg are going there physically soon. There’s been a huge amount of information packed into these first two episodes to set the scene, but it’s been handled so deftly that even as mostly exposition, this is the best show we’ve got right now. 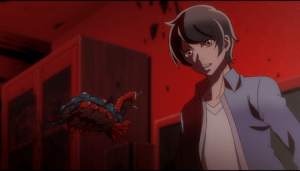 18if #2 – Haruto goes into another witch’s territory, only instead of the magical dreamland of last week, this one appears to have been finished in a completely different style and at the last minute. At least part of that is intentional; 18if features a different director every episode.

This witch wants to exact revenge for a thrill-killing of her family, and has discovered that she can kill people in a way that takes effect in the real world. (Assuming that is the real world, and this whole thing isn’t just happening in Haruto’s head.) Haruto, after considering the situation, decides to help her. And there goes any fear that this was going to be a simple story about one super-good guy fixing all the problems of a series of sad girls. Dr. Kanzaki is the do-gooder who wants to save everyone, even the thugs. But Haruto is able to decide that some people deserve to die.

Clearing up one other worrying point, Haruto is not rewarded with a nude lady this week. I don’t know if that’s directorial discretion or what, but hooray. 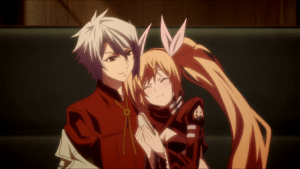 Chronos Ruler #2 – Kiri and Victo travel to Faux Monaco, which is a particularly good hunting ground for demons that feed on people who have regrets. There they finally run into an enemy that can’t be defeated easily — and a woman who claims to be Kiri’s mother, reversed back from death.

Wonder of all wonders, the love-hate relationship between Victo and Kiri is starting to work. Kiri’s line about “cutting ties with my homeland” is the funniest one of the season so far. And oh, I hope Mīna is Kiri’s real mother. After countless stories of heroes with dead, missing, or unknown parents, wouldn’t it be great to have one where both his parents are alive, largely healthy, and right there to embarrass him?

The tragedy of Victo and Mīna’s affliction also works better now that it’s being understated. I’m convinced that Alzheimer’s disease is part of the inspiration here; sufferers lose their most recent memories first, and other effects include increasingly erratic behavior. Reversing them to impulsive teenagers is a pretty good metaphor. 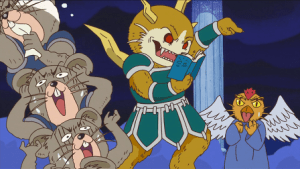 Magical Circle Guru-Guru #2 – Nike and Kukuri journey onward to North Village, where they are given the task of infiltrating their first dungeon. As befits any RPG dungeon, it is equipped with a designated boss, henchmen, and carefully labeled important items. They also pick up a follower whose purpose is to provide one kind of entertainment and be useless in combat. So basically, he’s the bard.

Guru-Guru is happily able to keep up the pace of the first episode. Not every joke is a hit, but if they keep coming at this rate, they don’t need to be. Now I’m convinced that this show has what it takes to stay strong for the whole season. 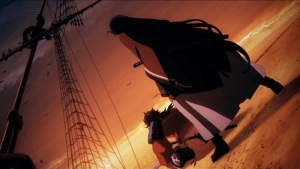 Katsugeki Touken Ranbu #2-3 – Having realized that fighting endlessly respawning mindless enemies is not going to make great TV, the writer confronts our heroes with a more interesting problem: stopping the real historical forces that wanted to cut off even the minimal contact Japan had with the outside world in the early 1860s. By provoking an atrocity against the Dutch, the disgruntled samurai hope to make them leave, and the Retrograde Army hopes for a war that will change history. Why the badguys want this is still unclear, but since questions are being asked now about broader goals, there’s hope that it will be explained at some point.

But first, everyone must regroup at the inn and introduce themselves as though they’ve never met before. Kunihiro is done being annoying, as the focus shifts to Yoshiyuki Mutsunokami and his issues. Being from an earlier era, he’s wowed by futuristic marvels like the revolver and the steam sloop, but he also has a big unexplained problem with Izunokami being in charge. He grudgingly agrees to be a team player after a while, and so the spotlight will probably now pass to everyone else in turn. 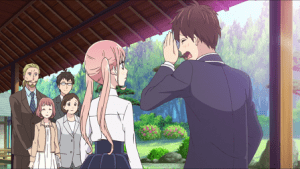 Love and Lies #2 – Yukari and his future bride and their families are all brought together for a formal first meeting, much like the custom was back in the day when arranged marriages were common in Japan. In fact, I think that’s the point of this story: what if the custom was still part of Japanese society today? How would modern kids handle it?

Love and Lies seems to be going out of its way to avoid ridiculous melodrama. After one attempt by Misaki to push Yukari away, she offers to try to help him ease into the new relationship, and winds up hitting it off with Ririna. Everyone in the main triangle is a basically nice person and unable to hide it. On the downside, the show can’t help indulging in some tired old rom-com hijinks, like having Yukari fall onto Ririna in a compromising manner, and later keep inadvertently seeing her undergarments.

As a teen romance, this doesn’t seem like a bad show, but people who were hoping for a story about changing the oppressive society these characters live in should stop here. 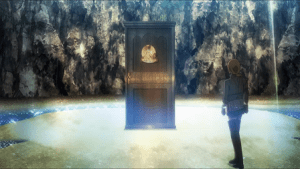 Restaurant to Another World #2 – In a remote land, a treasure hunter seeks the last and most secret treasure her father once discovered, and finds…the door into Nekoya, and the revelation of tasty, delicious food! A knight on a desperate mission is at the end of his strength when seemingly divine intervention leads him to…the door into Nekoya, and tasty, delicious food! 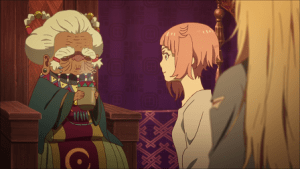 Rage of Bahamut: Virgin Soul #14 – After a week’s hiatus, Nina and Joan arrive at the dragon village. There they meet Nina’s mother, who explains the source of Nina’s uncontrollable power: Nina loses it around hot guys she’s attracted to because they…remind her of her father. What? Eww?

Joan and Nina also have a girl-to-girl chat about Charioce, and it comes down firmly in favor of True Love winning over all. There has been some speculation that Virgin Soul is a tribute to Disney princess films, and that talk and the new ending sequence seem to clinch that. I suppose that means Charioce is supposed to be something like the Beast. Except Disney’s Beast was just an obnoxious jerk, and Charioce has presided over a regime of torture, murder, and attempted genocide. Not quite the same thing!

With the village elder carrying Nina and Joan away to the land of the gods, they seem to be on the verge of a great adventure. But that’s another recurring problem with this show — it’s forever on the verge of things happening, but can’t just get a move on. It’s still the kind of show that would rather kick back and have an extended scene of its female characters in the bath than send them on their urgent quest as soon as possible.

Did I like anything about this expensively produced show? Well, I did enjoy the new Disco Cinderella end sequence, and it was nice to see it pulling together a coherent visual motif for the dragon village. But I’m tired of waiting for it to make good on its promises to pick up the pace.

And that’s nearly all the available premieres out of the way, except for The Reflection coming next week. Fate/Apocrypha has been acquired by Netflix to be the latest victim of its anti-simulcasting policy, and Symphogear AXZ and Kaito x Ansa have missed out on licensing altogether.

That means it’s time to pick a lineup for the rest of the season. So, Made in Abyss, 18if, Chronos Ruler, Magical Circle Guru-Guru, and Katsugeki Touken Ranbu, I choose you! Unless The Reflection turns out to be so awesome it knocks something else out. Rage of Bahamut: Virgin Soul, goodbye and good riddance!