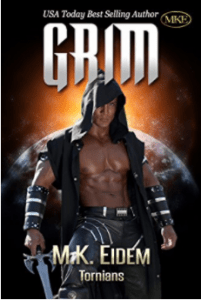 Welcome to Part Two of our discussion about types of SFR heroes and heroines, with book recommendations for each!

As a reminder, I recently asked readers and authors in several science fiction romance Facebook groups to weigh in on their current favorites, explain what the appeal was, and to provide examples of books they’d recommend with that type of hero. I also did an informal, unscientific poll. Space marines/military was the top category, followed by cyborgs. Aliens surprisingly tied with what our readers termed ‘beta heroes’ – explorers, colonists and scientists. Pirates and people unjustly sent to prison planets came next, with shifters, androids, gladiators, genetically engineered beings and ‘quirky heroes’ rounding out the suggestions. In Part One of this post, I covered space marines/military and cyborgs.

Today we’re moving on to the other categories the readers identified as favorites.

When it comes to actual alien heroes, I gravitate to M. K. Eidem’s Grim, which I love and reread at least once or twice a year. Grim did his best to act as an honorable man in all situations, no matter what the cost to himself might be, and he stepped up to be the stepfather to the heroine’s young daughters. Widow Lisa Miller of Earth made a place for herself with the Tornians as his mate and was the perfect woman to influence certain events and political trends that were outdated and/or not in anyone’s best interests. Really a terrific book. I also very much love Anna Carven’s Dark Planet Warriors series, and General Tarak of the Kordolians, the Big Bad (as his mate Abbey refers to him endearingly…except he actually IS the “biggest and baddest in the galaxy”). Not to be forgotten would be Michelle Diener’s Class Five series and the space-going Grih warriors – another major favorite for me.

I have to say I also have a sneaking fondness for Ruby Dixon’s Ice Planet Barbarians. They’re more “truly alien” in appearance and thinking than some of the hunky gentlemen listed above, no disrespect intended to anyone’s interstellar warriors, but I enjoy the way Dixon’s guys think. And interact with their Earth women guests. 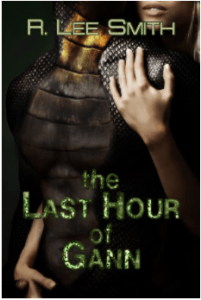 Author Regine Abel shared: “Alien heroes are my favorite with cyborgs as a close second. M.K. Eidem’s Tornians and Tracy St. John’s Clans of Kalquor were a big hit with me. I’m a sucker for the ‘Mars Needs Women’ trope which I discovered with Evangeline Anderson’s Brides of the Kindred series. In MM alien SFR, The Valespian Pack series by Lexi Ander is pretty awesome (except I’m about to give up on book 3 ever coming out [said with a smiley face.]). R. Lee Smith also rocks my world because she has no boundaries. I love that while her heroines are always human women, her male heroes rarely are. They’re true aliens, obviously humanoid with the right ‘equipment,’ but she still manages to make you fall in love them so much you don’t care that one is a lizardman, the other is a bug, etc.”

Reader Ina K provided her extensive and varied set of favorites: “I like aliens and shifters because they’re literally out of this world; I like reading about how hero and heroine learn about each other and their respective cultures – and I find them the most sexy :). Some favourite books are (my first futuristic romance) Knight of a Trillion Stars by Dara Joy and its sequel Rejar; anything by Nalini Singh; the Krinar Chronicles and The Krinar Captive by Anna Zaires; Contact by Susan Grant; the Love at Stake series by Kerrelyn Sparks; the Celta HeartMates series by Robin D. Owens; the Tinker series by Wen Spencer; the Dragonfire series by Deborah Cooke.” 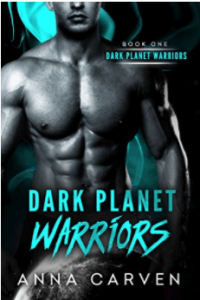 Reader Andrea B joins me in enjoyment of Anna Carven’s Dark Planet Warriors: “Aliens, my faves are Anna Carven’s Kordolians who overcome incredible torture and abuse to become incredibly strong soldiers who learn compassion and love from human women.”

Author Charlee Allden concurred: “Clearly I’m a fan of genetically engineered men, but aside from that I also love aliens, whether they be big ice planet barbarians a la Ruby Dixon or hyper military a la Anna Craven. I also have a soft spot for cyborgs.”

Paula M took us a bit further afield on the topic of alien heroes: “I like Alien heroes. As I’m mainly reading MM romance at the moment I can recommend Lyn Gala and her Claimings series… very much a hurt/comfort theme and the alien race is run by the grandmothers – so very fun.”

Moving on to “beta heroes”, in the discussions from which this post is drawn, the archetypal example of this set of characters encompassed “geeky scientists, explorers and the colonists forging their way in new worlds that deserve some attention too,” as explained by reader/reviewer/writer K. J. Van Houten. He may not be a character in a novel, but Daniel of the movie Stargate seemed to be the personification of what many people enjoyed in this category. 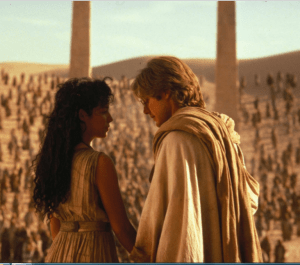 Reader Lisa A explained it well: “I enjoy ‘beta’ heroes. There doesn’t seem to be enough of them in any subgenre of romance, and I will accept recs! In SFR, these are often scientists or explorers. I totally feel in love with Daniel Jackson as portrayed by James Spader in the Stargate movie. It wasn’t a romance but it did have a quite nice romance subplot for Daniel. (Yes, I realize that there’s a show – I haven’t gotten around to it yet.)  My first foray into SFR was Rebels and Lovers by Linnea Sinclair, and I picked it up because the model on the original cover wore glasses. The hero in that one was an “alpha” in many ways but not in several others.”

Pirates came next on my informal survey. Reader Merry G set the tone with enthusiasm: “Space pirates! Yes, love ’em! No matter what the setting, I just love stories about people (guys and gals) who have a heart of gold underneath, despite all that questionable and often not particularly legal exterior. Who can resist a lovable rogue? But it’s so uplifting knowing there are people out there, in reality and fiction, who may not measure up to accepted standards in some ways, but prove themselves to be valuable and worthwhile citizens, especially once they come in contact with an equally challenged or totally innocent heroine.

“One story immediately comes to mind: Rayessa And The Space Pirates, by Donna Maree Hanson. The premise for this book is amazing! Another character surviving on the fringes, both physically and mentally. I loved the young heroine and her only companion, and their circumstances and subsequent adventures were the stuff of classic, amazeballs science fiction along with deep, irresistibly interesting characters. And that doesn’t even include the actual pirates! A very satisfying read all round, though.” 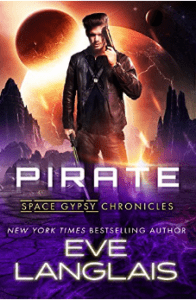 While the book mentioned by Merry is in the Young Adult category, author Eve Langlais has written a very adult series, Space Gypsy Chronicles, which starts off with Pirate, featuring the highly intriguing Rafe, his bossy ship the Annabelle, and Earth woman Emma as the feisty heroine.

I have to say that when I think of space pirates, I always go straight to the image of the late Robert Urich in swashbuckling glory in the 1980s film, Ice Pirates. He’s the standard by which I measure all other others.

Merry G weighed in again for us on the next category – prison planet tales. “I also love heroes convicted of crimes they didn’t commit and dumped on ghastly, remote prison planets, hoping for rescue/escape and consequent rip-roaring adventures in pursuit of proving their innocence, aided of course by the perfect heroine comrade.” 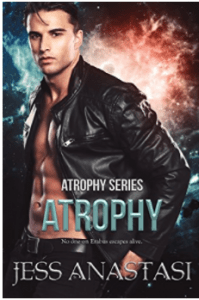 “I LOVED Atrophy by Jess Anastasi,” she went on to share, “Because the thought of how it would affect the hero having spent 12 awful years imprisoned fascinated me. I felt there were parallels with the extraordinary true story of Henri Charrière in his book Papillon, which I read many years ago, and Steve McQueen and Dustin Hoffman’s masterful performances in the film of the same name. I also really enjoyed Trapped, by Alison Aimes. I loved how another innocent man condemned to suffer a living hell and having discarded his humanity simply in order to survive is gradually (and sizzlingly) pulled from the abyss by a strong heroine whose survival instincts kick in, after crash landing on the prison planet, in a way that doesn’t just include saving herself. It was awe inspiring to see their relationship grow from a deal of mutual convenience to a deep, healing connection.”

And a final thought from Merry on prison planets: “Atrophy and Trapped brought back fond memories of the 1970s British TV series, Blake’s 7. Blake was set up and falsely accused and convicted of a serious crime. He, along with future Seven members, is transported to a remote, dark hellhole prison planet. [LOVE] that series!”

I think the prison planet that remains in my own mind the most vividly is Ann Aguirre’s Perdition (The Dred Chronicles Book 1). It’s a very dark, bleak book and many grim things happen but I was riveted by the setting, the heroine ‘Dread Queen ‘ Dresdemona Dred Devos and the very unusual mercenary Jael, who made a terrific tormented hero.

But wait, Merry had one final recommendation to share: “Fortune’s Hero (Soldier of Fortune Book 1), by Jenna Bennett. This one also has a tortured (literally) hero and a reluctant hostage heroine, which dialed up the enjoyment and to-be-read-again factors even more for me. I rarely read books more than once, so that’s really saying something!”

One thought on quirky lead characters from YA science fiction author Rachel Meldrom Walker: “I like quirky heroes that are human but not stereotypes of Star Trek/Star Wars characters. My favorite unexpected character is Ofelia, a crafty old woman from Elizabeth Moon’s Remnant Population – probably one of my favorite SF books.” 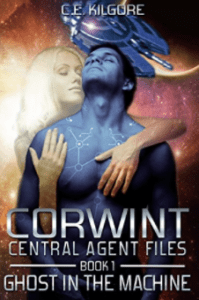 And we’ll give author Pippa Jay the final word on androids to close this out: “I definitely have a thing for androids, mostly because the ones I tend to read are either aspiring to be human (strange, but endearing) or in some cases trying to regain the humanity they’ve lost (human minds uploaded to mechanical bodies for various reasons). Many of the stories are about what it actually means to be human and the better qualities we have – compassion, mercy, love, sacrifice. My favourite is Ethan from Ghost in the Machine by CE Kilgore. The book opens with him experiencing disappointment yet again as a human lover fails to stay the night after satisfying her curiosity about sleeping with an android but without seeing him as anything more than a mechanical toy rather than the man he aspires to be and wishes to be treated as. And you may quote me!”

I hope you’ve found some useful recommendations in our two part discussion and we’d love to hear your suggestions for favorite SFR heroes or heroines!