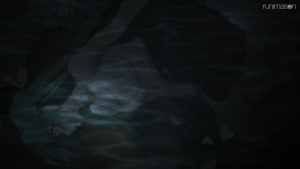 Higurashi: When They Cry – GOU #8 – In a matter of hours, Rika vanishes, Mion flips out, and then Keiichi somehow allows himself to be led into a very deep basement and locked into a cell while everyone else gets busy dying. But at least he learns a few more things about the town along the way.

So there are three major families: the Sonozakis, the Furudes, and the Kimiyoshis. Mion is the head of the Sonozakis, which explains why she gets to casually carry a gun from time to time, although it sounds like her uncle handles a lot of the family business at the moment. Rika is the head of the Furudes, who share a name with the shrine. (Presumably the priest who died a few years ago was her father, and she has no siblings.)

Mion says that it was when Keiichi gave her the doll that she started thinking about her responsibility as a Sonozaki to get whoever is using Oyashiro’s curse as a cover to settle scores to stop it. That presumably was Rika’s motivation in nudging Keiichi to make the gift. But it backfired by getting him so entangled with the Sonozakis that he wound up breaking into the shed, and after that everything is wrong.

As for who is trying to murder whom: Shion, the mayor, and all the other people clogging up the Sonozaki well could be Mion’s doing, either directly or through her minions. Rika may have been murdered by the weird construction guys seen at the clinic in the previous arc (cleaning up after disappearing Takano?). Satoko dies in an apparent double murder again, but this time with Mion instead of Rika. It looks too bloody to have been a shooting, so maybe this is who Rena chopped up this time around.

Next time, it all resets again. I’m guessing the focus of the next arc has to be learning about the mysterious Kimiyoshis. 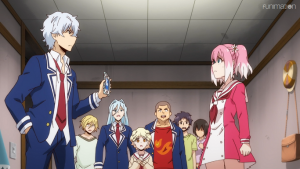 Talentless Nana #8 – After defeating Yūka, Nana offs two more people before lunch and then persuades another student to destroy the evidence in plain sight. It’s a very good day, right up until Mr. Detective Prodigy there has to go and ruin it by catching her in a mistake.

This time Nana is cornered, unless she can pull out a truly brilliant excuse or she’s managed to ditch the incriminating phone despite Kyōya watching her like a hawk. Although, there was one moment where Kyōya took his eyes off of her— when he tested the poison and Nana went to open the window. She might perhaps have had a chance to drop the phone out while she was accidentally letting on that she knew it didn’t open properly.

The trend in Nana’s victims lately is to set them up as bad people who might deserve a little killing. The very first one had nothing really wrong with him other than he bore a strong resemblance to the protagonist of My Hero Academia and the author here clearly hates My Hero Academia. But Yūka was seriously disturbed, the guy before her was a creep, and the two latest victims were bullies.

Also the two mean girls were followers of unfeminine fashion trends, whereas the girl they were bullying is much more traditionally feminine. I’m not sure if that was consciously intended or not. 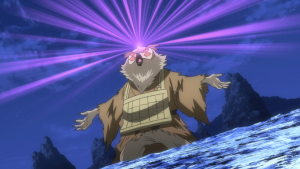 Yashahime: Princess Half-Demon #8 – By the power of the purple pearl, Yotsume levels up so that he can see into everyone’s dreams. And although things are a bit scrambled, he gleans a number of facts which may not be that useful for establishing combat weaknesses, but they sure are handy for viewers trying to sort out the backstory. Hey, it beats a bunch of As You Know Bob dialogue.

So, at some point shortly after Moroha was born, Kagome, Inuyasha, Sesshōmaru, and Kirinmaru all vanished through some sort of gateway. Moroha was left behind with a tanuki known to Kagome, who was also Takechiyo’s father, who at some point left the two of them with Jūbei. Sesshōmaru must have eventually returned, as he left Setsuna with Kaede much later.

Meanwhile, the dream butterfly is not only taking Setsuna’s dreams, it’s then giving them to the young woman trapped in the Tree of Ages. Is that how it keeps her trapped, or is it how she stays alive while imprisoned there?

Speaking of exposition: It’s pretty weird that the on-screen text is still reminding us every episode who the main characters are, but it allows a chance to enjoy little puns like Yotsume’s name. It’s written with the character for night (here pronounced yo) and claw (tsume), so his name is officially Nightclaw, right? But written with different characters, yotsu me could also mean “four eyes”. Clever, at least until he messes it up by growing a fifth one. 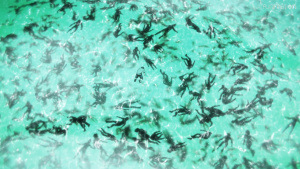 Akudama Drive #7 – The mysterious siblings are headed for Expo Park because they are the result of a secret experiment to create immortals, and rather than being handed over to Kanto, they want to take the rocket at the center of the expo and head to the moon. Suprisingly, the exhibit turns out to be real, but the moon is fake, the Akudama have been betrayed, and now the siblings are split up and everything is horrible.

Up until now, I’ve admired Akudama Drive has maintained a relatively believeable cyberpunk setting with a solid feeling of internal consistency, but I will admit that approximately nothing in this episode made sense. That is not how genetic engineering works, the way the kids heal up has some serious issues with physics, how does a complete 1970s rocket launch system survive in operational condition long enough for people to forget that humans ever went to space, why did anyone bother to put the fake moon in place, and how does the Boss just happen to have a handy button to switch the moon off? There is not even any point in dwelling on these issues, because this is not the sort of show to go back and explain things.

One thing that did sort of pay off was the mention of Executioners disguised as Akudama. Instead of that, we learn that the Doctor is a turncoat. Does this mean the Hoodlum is cleared? I don’t think so. It’s still awfully suspicious that we haven’t seen his full encounter with the Pupil. 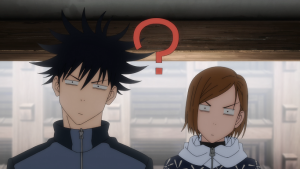 Jujutsu Kaisen #8 – The team from Kyoto arrives and proceeds to take the school competition way too seriously. Staff of the two schools don’t especially like each other either. Meanwhile, Yūji gets to miss all the fun to go look at some people who’ve had their heads magically exploded.

There are a lot of odds and ends here, mostly about filling in new characters and their relationships with existing ones. One of the more notable moments is Gojō expanding on his political philosophy. Where it previously sounded like the garden-variety ageism you can get in sf from almost anywhere in the world, the stuff about power hidden by misguided fools and returning with a new generation is skating a bit close to the rhetoric of Japanese right-wing militarism.

With no sense of how much time has passed since the last episode, it’s not clear if Yūji gets time to deal with the new badguy before his month is up and his non-death is revealed at the school tournament, or if he has to handle both at once. Both at once would be more interesting, for sure.